A Word Edgewise: The Bat

Hey readers! I’m going to be posting editorial-type articles here (under this tentative title) discussing certain issues that I feel pertain to the “geek community” (whatever that means anymore). Basically, I’ll be using this space to root for the dogs I’ve got in various fights. Hope you enjoy.

The dust has finally settled (in my mind, anyway) after the epic summer-blockbuster duel between Marvel’s The Avengers and D.C.’s The Dark Knight Rises. I’ve been ruminating on the aftermath for some time (obviously), and though my two cents are probably a late payment by now, I can’t help but explain the reasons for my loyalty to what will surely go down in history as a second-fiddle act to Joss Whedon’s kickass big-time (Serenity notwithstanding) Hollywood debut.

I’m not here to argue with you about which was the better movie; I had one hell of a lot more fun watching The Avengers, and that one is always going to be this year’s ultimate winner.

You know you love it.

I can get into the not-so finer points of why it’s possible to justify TDKR as a more intense movie (see: Loki’s incompetent whimpering bitch status), but I won’t try and tell you that it’ll be the one you’ll be sitting down to watch in a decade’s time. I don’t really think I’m saying much that hasn’t already been said, but it took me some time to arrive at what might seem like an obvious conclusion.

So you ask: “Why the loyalty to the Bat, bro? You love The Avengers. Come on. Join the party.” And you shouldn’t think for a moment that you aren’t making a compelling argument. I get it. I do. The big team just kicked things off, Thanos is around the corner, and Joss is staying strong. What’s not to love? It’s the dawn of a new bitchin’ era where the movies everyone cares about are almost literally jumping off of the vivid pages that have sustained some of us since childhood. But it can’t be helped. I’m a complete sucker for Batman. Why? Because he’s a total goddamn psychopath. 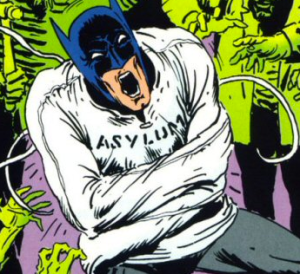 Batman, while popular, is a strange duck. The man is driven insane by an event that is rather commonplace in the world of comics (loss of parents), and we have been watching his trauma-driven quest for justice for the better part of a century. This is Batman’s hook. It’s where everyone gets dragged in. Bruce Wayne took a look at the world and its state; he saw firsthand the commonplace and petty violence that interrupts our lives and did something we all wish (on some level) we had done: he said “No.”

He denied something we all accept in our mortal lacking of moral fortitude, and in doing so, denied all other things in pursuit of his denial. He refuses any real romantic or platonic interest, usually feigning his interest or loyalty to better serve his own ends, and comfortably dropping them at the first convenience to throat-punch some thugs or weep over his parents’ grave. He demands the absolute most from his partners, gouging his imperatives so deep in their minds that they will work for him from a wheelchair that he had a hand in putting them into (see Barbara Gordon/Oracle). And I love him for it. 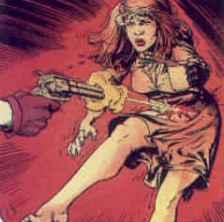 “Don’t worry, Batgirl. I’m sure this isn’t going to do any permanent damage.”

That isn’t to say I don’t love other comic characters—especially Marvel’s lot. I grew up on the X-Men, and the top tier of my wedding cake was themed in their colors and logo. Xavier was my Dumbeldore, and as a kid I dreamt again and again of the day when my mutant powers would manifest and I would be whisked away to his School for Gifted Youngsters, becoming a defending margin for the marginalized. Later, I would grow to understand and even sometimes root for Magneto: a Frankenstein’s monster to the world and himself, and my perfect symbol of the informed radical counter-culture. His vision for perfection was frighteningly tempting to me, and served as a clear reminder of how one can so easily become what they hate in their search to destroy it.

And therein lies the rub—the maddeningly conflicting structure that is Batman: does he become what he seeks to destroy, like Magneto? He would tell you himself that he has not, and makes a good case: he refuses to kill, he trusts in a justice system that he can influence but not control, and he adheres (almost always) to a clearly defined (yet sometimes murky) moral code that defines who fights alongside him in Gotham’s streets, and who looks to the signal in hope of his answer. I hear tell that Batman ends up making his own trouble; that the crazy villains like the Joker only exist because he was the Manhattan Project in a “we’re all totally screwed up symbols of stuff and now maybe we’ll kill you” arms-race. And maybe those people saying those things are right. But I don’t think Batman becomes the villain. At the end of the day, he still saves the kid. Maybe he did escalate things. Maybe he has some blame to take. But two facts still remain: any blame Gotham has for him is accepted without complaint, and at the end of the day Batman’s just a guy, reacting to a totally messed up situation in a really understandable and admirable way.

If Batman did, in fact, start a caped arms-race, what exactly would dissenters propose he do? Quit? Back off? Once Joker and the rest of the gallery of rogues showed up, shit got real. Like, really real. It was like freezing off a wart only to find bone cancer beneath it. Batman had two choices: back down and hope the super-crazies get bored (Metropolis is like, a really cool city, guys), or double-down on a bet that had already consumed his chance of a normal life. Say what you will, but if self-sacrifice is the Western-culture measure of a hero’s worth then we have our winner.

If anyone in the Marvel ‘verse was remotely real, they’d all be crazy. Wolverine would be a slavering lunatic, and no amount of group-therapy could fix it.

If my best friend drove a metal spike through my back and paralyzed me forever, I would not be cool with it, and I wouldn’t play chess with him in his cell during visiting hours.

I’m a big believer in the “get it where you can” philosophy. A lot of people don’t like to hear it, but the way I see it is my comics are as good as any source of moral guidance. Batman, for me, symbolizes a good man who’s in over his head and who does the best with what he has. I can only aspire to that kind of greatness. And despite his fortune and training and Sherlock-style mind, he’s still just a guy. With a cape around his neck. And he’s trying really, really hard to do something good. Imperfect, self-sacrificial, anti-social, likely sociopathic in a really weird and sorta-good way.

My soapbox is near collapse, so I guess I’m done. I want to stress something before I go, though: superheroes being unreal isn’t a bad thing. They simply havecartoon personalities to match their cartoon faces, and I have a whole lot of fun reading about them anyway. But Batman still wins, every time, even when he loses.

2 responses to A Word Edgewise: The Bat