We take every opportunity possible to incorporate a cheese-breadcrumb crust into a meal. For those of you who don’t know us, that statement might sound hyperbolic. But like Ron Swanson’s famous bacon and eggs bit, this is literal. One of our many breadcrumb-cheese crusted dishes is chicken parmesan. It’s a chicken breast, dipped in egg, then dipped in a breadcrumb-fresh grated parmesan mixture, and then, yes, pan-fried to deliciousness* in olive oil (or EVOO as one annoying little brunette with weird boobs calls it on Food Network).

We cheated on this dinner and just used an inexpensive, pre-made spaghetti sauce. And don’t turn up your nose; it was awesome. We added some fresh minced garlic to the sauce, boiled some spaghetti noodles, tossed a baguette in the oven, added some feta-stuffed olives from Harmons (OMG YUM), and called it good. Really good.

END_OF_DOCUMENT_TOKEN_TO_BE_REPLACED 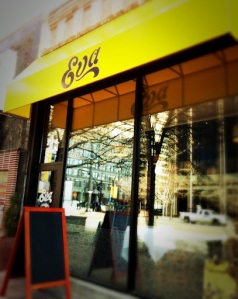 Eva is one of our favorite restaurants in SLC (dare I say, possibly even our favorite, considering the price and quality). This is sophisticated, carefully-crafted food for a ridiculously inexpensive price. We recommend going for Saturday brunch and trying the loukamedes, which are delicious pieces of heaven (kind of a mix between donut holes and beignets). And for brunch, also go for the brunch pie (ham, gruyere, and egg pizza pie topped with hollandaise).

The Cabin in the Woods: ‘Something weird is going on’ 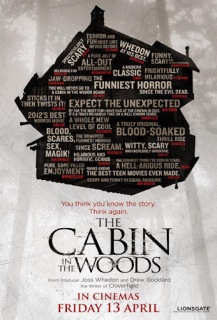 At this point, it’s no secret that I’m a sucker for horror movies, but this one takes the cake. This is one of the funnest horror movies I’ve ever seen (yes, I might even like it more than Jennifer’s Body, which is a statement I haven’t yet uttered about a horror film until now). Not only was The Cabin in the Woods a celebration of all things horror, it was clever, shocking, and different. It gushed (pun intended?) with originality, a rarity in contemporary horror.

In the era of the postmodern smarty-pants viewer, well versed in genre constructions, we are in the age of meta-horror. It seems that every film since Scream has tried to point out its own constructedness, paying homage to the horror genre and referencing the horror conventions that have come before. The Cabin in the Woods (we’re talking the 2012 version here, of course) forces this agenda to a new level, pushing the purpose, commentary, and conversation of contemporary horror. This isn’t self-referentiality for the sake of street cred– this is self-referentiality that propels itself and the genre to something new, one of the markers of a great work.

And in case you were wondering, yes Joss Whedon is an incredibly talented writer who has grown a lot since Buffy and Angel. Moments of serious horror and gore are undercut with witty and thought-provoking humor that fits into a story that pushes its premise to its limits. I can’t wait to see what this guy does with The Avengers. To all you nervous, Whedon nay-sayers who worried if he’d be able to shine on the silver screen, I just want to give you an inelegant and irritating (but well deserved) “I told ya so.”

The easiest dinner in the world: assorted meats and cheeses. For a wide variety of the aforementioned, we recommend Caputo’s, Pirate-O’s, or Harmons. This time we made a quick and easy Harmons run and got some freshly sliced coppa and prosciutto, then added a strong bleu cheese and a sharp gouda to the mix. And we couldn’t resist stopping by the olive bar, where you’re able to mix-and-match an assortment of olives and pay by the pound. We paired it all with a fresh loaf of Harmons’ garlic bread.