So here’s the scoop on what happened at Comic-Con today. I’m not gonna lie, some pretty freaking awesome stuff went down.

Jaw-dropping moment today: Guillermo del Toro announced he’ll be directing a remake of Disney’s Haunted Mansion. He beamed as he made his announcement and explained that he has an entire room in his house devoted to the spooky Disneyland ride. He says this film will not be a comedy; it will be scary but fun. He also assured the crowd, “Don’t worry, we have not been returning Eddie Murphy’s calls.” I love Guillermo del Toro. 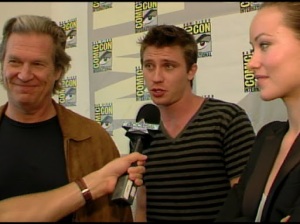 At the Tron panel, they showed some amazing footage. I now have more faith in the film than I ever did. The film shows the Jeff Bridges you see before you, but it also shows a digitally-altered Jeff Bridges, who appears 27 years younger. The effects are seemless. Check out the exclusive Comic-Con trailer here  http//:g4tv.com/videos/47595/Tron-Legacy-Comic-Con-2010-Trailer/