Guillermo del Toro is a master filmmaker, whose films explore the unknown, the fantastical, and the supernatural. Many of his films defend the outcasts and the bizarre, undermining commonly-held expectations of good vs. evil and appearances vs. reality, ultimately deconstructing binaries and playing with genre tropes. Pan’s Labyrinth and Crimson Peak share similar themes, both in terms of writing and visual cues, imparting the same moral at the end of each story. 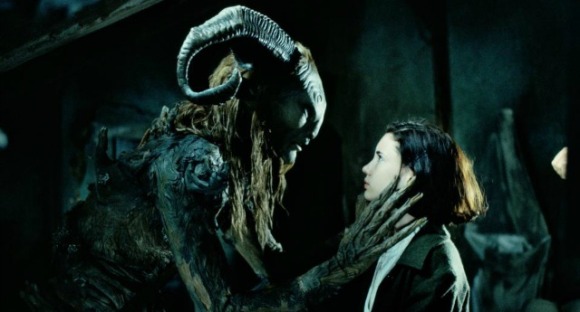 One of my all-time favorite films, Pan’s Labyrinth, complicates popular fairy tale tropes—specifically, undermining characters’ face-value. In Marvelous Geometry: Narrative and Metafiction in Modern Fairy Tale, scholar Jessica Tiffin notes, “Lack of physical or circumstantial detail in the fairy tale thus goes hand-in-hand with a more profound effect, the simplification of morals and principles to the point where any conflict is dealt with in terms of absolutes—the hero, heroine, magical helper opposed to the villain, monster, or competing hero” (14).

Because fairy tales simplify people, the tales can then simplify morals. Tiffin says, “Unlike other forms of prose narrative, the fairy tale has no real interest in human subjectivity or psychological characterization of the individual. Like the events of fairy-tale narrative, characters are rendered down to essentials, described in terms of one or two defining characteristics” (14). By essentializing characters in terms of good and evil, fairy tale characters (and by extension, readers of fairy tales) know who’s good and who’s evil. The heroes and villains are readily apparent as such in both description of their attributes and appearance. Typically, good characters are beautiful, charming, and charismatic, while villains often have physical flaws, sometimes driven by jealousy of the more “beautiful” hero/heroine. It is this pattern within the fairy tale genre that del Toro critiques. While del Toro heavily prescribes to a good/evil binary, the good and evil characters are not readily identifiable by appearance.

One instance in which Pan’s Labyrinth overtly places itself in conversation with fairy tales is when Ofelia tries to determine if she has, in fact, encountered a fairy. A strange-looking insect follows Ofelia home and Ofelia asks it, “Are you a fairy?” Skeptical, she holds up one of her fairy tale books that showcases a dainty, humanoid fairy with wings, wearing delicate clothes made out of leaves. Ofelia points to the picture she says, “Look. This is a fairy.” Upon viewing the illustration, the brown, strange-looking insect transforms into a traditional-looking fairy, like the one in Ofelia’s book. When Ofelia first sees the insect, she’s frightened, but once she sees the fairy transform she realizes that the fairy’s form, whether humanoid or insect-like, is arbitrary. Ofelia decides to trust the fairy based on its actions instead of its appearances, seeing the value in withholding judgments based on physical cues.

As another example, because of the faun’s frightening appearance, Ofelia (along with the audience) is not sure whether he can be trusted. Of course, at the end of the film, it is her distrust of the faun that allows her to complete the final task, but this is because of the faun’s actions, not because of his appearance. In contrast, the stepfather may fit the “evil step-parent” trope, but when we first see the stepfather we don’t distrust him based on appearance. We do not know that the stepfather is evil until we see his cruelty as the film progresses, beginning with small things like ignoring Ofelia and ending with large things like, well, shooting and killing Ofelia.

The complication of visual expectations offers a more sophisticated critique than simply “things may not be what they seem” because the film is profoundly in conversation with fairy tales—stories that reinforce the importance of appearances across generations, cultures, and various demographics. Pan’s Labyrinth claims that beauty is only skin deep and reminds us that people are capable of true horrors.

While Pan’s Labyrinth is deeply in conversation with fairy tales, Crimson Peak is in conversation with horror and the Gothic. Similar to the villains of typical fairy tales, horror antagonists are usually pretty straightforward. Yes, sometimes we get into the realms of meta-commentaries that play with audience expectations, but most horror, especially slasher horror, deals in the readily-apparent forms of evil: serial killers, vengeful spirits, monsters, demons, etc.

Crimson Peak further undermines audience expectations because the film is firmly situated in the Gothic tradition with its setting and themes. In most traditional Gothic stories, when a young woman is lured away from her family by a charming, rich young man, that man is the main villain. In The Cambridge Companion to Gothic Fiction, Jerrold Hogle says, “A Gothic tale usually takes place (at least some of the time) in an antiquated or seemingly antiquated space—be it a castle, a foreign place… a large old house… Within this space… are some hidden some secrets from the past (sometimes the recent past) that haunt the characters psychologically, physically, or otherwise at the main time of the story” (2). And furthermore, in Gothic narratives “women are the figures most fearfully trapped between contradictory pressures and impulses… fearing the pursuit of a domineering and lascivious patriarch who wants to use her” (9).  Therefore, Crimson Peak hints towards Thomas’s villainy, simply by virtue of its genre.

Trailers for Crimson Peak lead you to believe that you’re in for a good, old fashioned ghost story—a tale of a haunted house. It seems that evil spirits lurk around the mansion of Crimson Peak, causing mischief and enacting revenge. In part, you’d assume this from the previews based on the visual and contextual clues provided. The spirits are not white, as friendly spirits are often depicted, but they’re black or red—colors associated with power, death, blood, and chaos. What’s more, the ghoulish apparitions look like rotting corpses with exposed bones and less-than-cheery dispositions. Their movement is jerky, uncomfortable, and unpredictable rather than smooth and floaty.

Despite the monstrous depictions of the ghosts, they have friendly intentions, warning Edith rather than harming her. In the end, the villains are beautiful—and rather than Thomas enacting the male villain trope, the main villain is the graceful and alluring Lucille. While we suspect foul-play from Thomas based on the film’s genre, it’s only as the film progresses and we see Lucille’s actions that we realize something isn’t quite right with her, and Thomas is victim to her abuse.

In both Pan’s Labyrinth and Crimson Peak, the true monsters are beautiful people, and the scary-looking creatures are helpmates, guides, and guardians. Del Toro’s work celebrates the unusual, the rejected, and the supernatural, urging people to look past appearances and be open to embracing the strange rather than fearing it. This may seem like a simple, warm, fuzzy message until you read the other half of that message, which warns that not all people are good, nor should they be trusted. It’s people—not supernatural forces—that are the biggest danger and source of evil in the world.

Be the first to start the conversation!