6 Reasons Why You Should Play Night in the Woods

Years ago, I played a game demo at the Pop Culture Museum. It included a scene with a talking cat and a fox who get sugar-high off donuts until their paws shake and they swear they can see through space and time. I was sold.

I had to wait an agonizing couple of years before Night in the Woods was complete. I bought this beauty the day it came out, and I tried to savor it, but I finished the game in a week. Here are just a few reasons to love it: 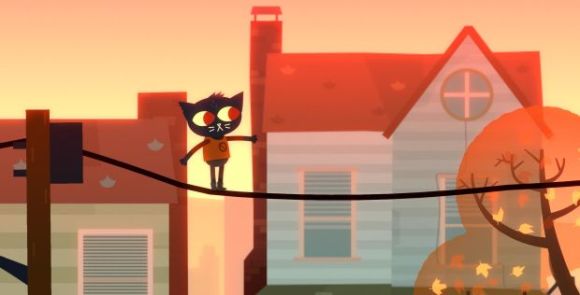 In Night in the Woods, all the sounds complement each other as a cohesive whole. For example, when you jump on a telephone wire, you hear harp strings plucked with each footstep, and it perfectly aligns with all the other background sound. All the sounds that accompany speech and movement and the almost-negligible background noise work in literal harmony. It’s impressive. 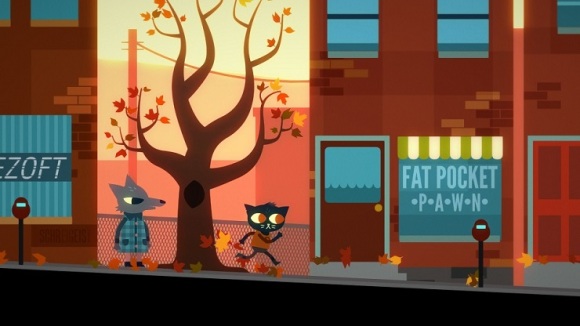 This game has giant-eyed anthropomorphized, cute woodland creatures in clothes. I’m not sure what else you need. But there’s also a flat, paper-cutout look to the game, which results in pleasing shapes and bright, blocked colors. It’s pure eye candy. 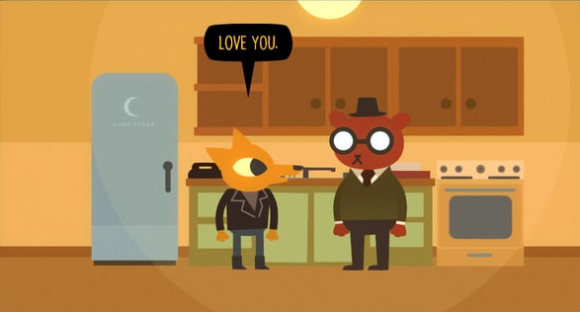 The main character in Night in the Woods happens to be a bisexual, non-femme female cat. Her best friend is gay, living with his adorable bear of a boyfriend. And none of this is fussed over. It’s just a depiction of characters living their lives. It’s wonderful. I wish such depictions were more common in media. 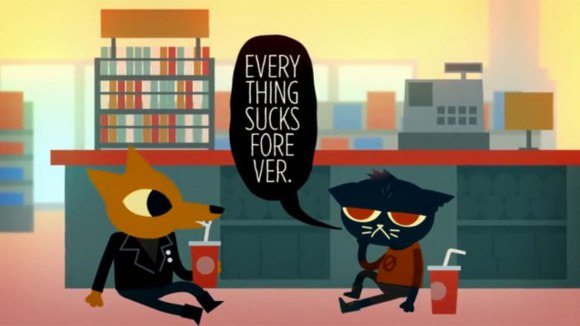 You’d think a storybook-looking game with talking woodland creatures might be magical or downright saccharine. But Night in the Woods grapples with some pretty heavy topics, including child abuse, depression, and anxiety. Its treatment of said topics isn’t pretty, nor does it gloss them over or give the impression that everything will be okay. The tone manages to be somewhat hopeful but also unflinchingly honest. 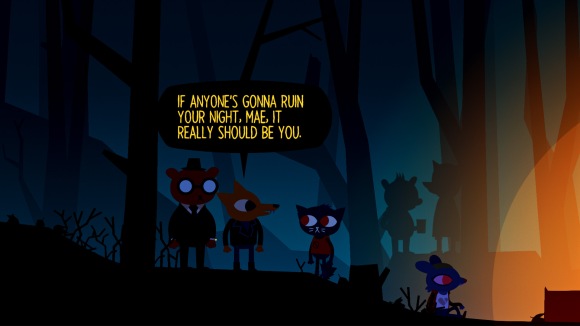 Some of the more depressing themes are undercut with biting snark and witty banter. But the game manages not to stray into the realm of tonal dissonance. The conversations seem real. I think that’s the best compliment you can give a writer. 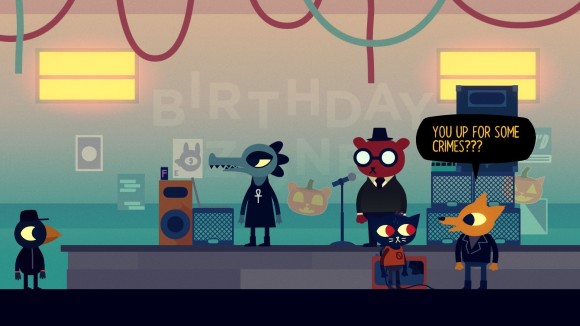 Night of the Woods isn’t about romantic love or going on some grand adventure. It’s about friendships: the small interactions and big gestures that make up a caring relationship over time. The main story can be summed up like this: terrible things happen to everyone pretty constantly… but those things are more bearable if you have friends who you can depend on and share things with—including the really ugly stuff.

I know narrative-centered games aren’t for everyone, but I eat them up. If you’ve played Night in the Woods, I’d love to know what you thought. Or if you have suggestions for similar games I should play, I’m all ears.